Today I had the idea to come up with the names of things that would have a logo, then design that logo. This post is dedicated in part to the like ten minutes earlier today that I spent convinced that "whaver" was a word that was just not in the dictionary when I went to look.

I'm not fully sure how I want this to look, also I don't know that it's not already real. But anyway, the inspiration was thinking about representing English words in katakana, and I thought of "sine".

"Sine" is an interesting word to think about in that context, because it's like a false friend for transcription. It looks like it could be 「シネ」, but that happens to sound like an unrelated word, and isn't pronounced right. The correct pronunciation would be from 「サイン」, but suppose instead we pretended we knew less about English, and said "It starts with a 'si', so there must be a 'sh' sound." This doesn't really make sense, but I thought it would be interesting.

It looks like a few other people have noticed "sine"/"shine" is a thing.

Anyway, I'd been thinking about Japanese music a bunch, because we've been watching FLCL lately, and The Pillows left way more of an impression on me this time. So, I was thinking about this as, like, a band name in katakana. "s(h)ine wave" is interesting to me because it's two words together, and they behave very differently when you try to put them into katakana. The best katakana transcription of wave, in terms of pronuncibility, is probably 「ウエーブ」, which gets romanized back as "UĒBU". But it's possible to represent it more exactly in all kinds of peculiar ways.

Why not pile on more, then? By analogy with the first word, add an "h" after the first letter. This looks to most English speakers like it should have no effect (beyond making it not a word), but Japanese transcription (sometimes) doesn't have the wine-whine merger, so suddenly there's a 「ホ」 at the beginning, which... replaces the 「ウ」.

Thinking over all of this, I think the most important consideration is what would sound cool to shout. The major point of contention is the "wa". It will either be:

Maybe the trick is to look at the overall balance in length. This has to come after 「シャイン」 (3 morae), so do I want 6 or 7 morae total?

On reflection, I like the "Whave" idea because I could, in the latin alphabet version, replace it with "ℏ". The Planck constant over the circle constant τ gives us a nice connection to the trigonometric functions. This invites further consideration of the romanization of the transcription. If we expand out the macron, one possible rendition is:

Which looks like it should mean "egg" in some romance language or other, but I don't care about that right now. One thing I see when they're in monospace is that two different kana got converted to the same letter, and they're near each other in the words:

Can we take advantage of that, share the letters? To do so, we'd have to curve the words, like... Like a sine wave. The obvious thing to consider is that one of them has two letters between them, while the other has one. We could distort the curves to accommodate, or we could change the letters... "ℏœivu". For now, I want to focus on distorted curves. It's about time to put pencil to paper. 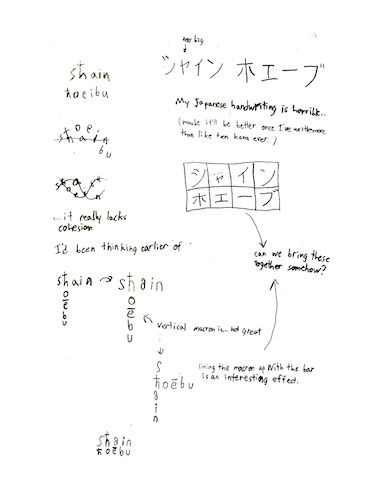